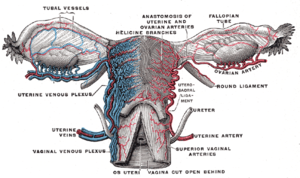 Vessels of the uterus and its appendages, rear view. (Photo credit: Wikipedia)

Formation of ova from the primary oocyte begins on the onset of puberty. The discharge of the ovum from the ovarian or graffian follicle is called as the OVULATION.

Production of sperms occurs continuously throughout the life in males, where as the production of ova in women is not continuous and stops after certain age. It is known as menopause. The production of ova occurs once in every 28 to 30 days. During this period, the female reproductive system mainly ovary and uterus undergoes a large number of structural changes in anticipation to fertilisation and pregnancy. Ovum degenerates after 24 hours after its release when fertilisation does not take place. Again changes take place to produce another ovum. This occurs continuously and this cycle of changes in the female reproductive system is called as MENSTRUAL CYCLE.

Only one ovum is released during each cycle from the ovaries aternating with each ovary. (Each ovary produces ovum alternately in successive months) If fertilisation occurs and the zygote reaches the uterus, the menstrual cycle stops until child birth occurs. This menstrual cycle starts from the age of 13 to 14 years and continues upto 50 to 55 years. Then the ova production stops after that.

During the proliferative phase, repeated mitotic divisions takes place in the cells present in the follicle, fallopian tube, uterus and vagina and there will be an increase in the number of cells. At this phase the follicle matures and the ovum is released. This phase occurs during the first 12 to 14 days of the cycle and the ovum is released generally on the 14th day of the cycle. The growth of the above tissues occur in anticipation of fertilisation and pregnancy. With this the proliferative phase is completed.

The second half of the cycle is the secretory phase. This phase occurs in the next 14 to 16 days. During this phase, the ruptured follicle gets converted to corpus luteum and the uterine walls get thickened. Uterus waits for the embryo to reach the uterus to get attached to the walls of the uterus. If the embryo does not reach the uterus by 26th day, the cells of the corpus luteum and the walls of the uterus get detached and are expelled out along with some amount of blood. After this, immediately the proliferative phase starts once again. The menstrual cycle is under the control of hormones which are secreted by the pituitary gland like follicle stimulating hormone, luteinizing hormone and prolactin. It is also under the control of hormones secreted by ovaries like oestrogen and progesterone.

Human Body Our Human Body represents the entire structure of the human organism. It consists of trillions of cells that are organised biologically to form ... Read More

How to reduce the effect of Premenstrual Syndrome?

Know about hormones secreted by male and female gonads

Prenatal care of pregnancy is very important for development of a healthy baby and to prevent any pregnancy complications. Therefore pregnant women should be monitored ... Read More

Testicular Biopsy – Indications, How is it Done? Results

Intra Uterine Insemination (IUI) – What is it? To whom it is done?

Contraceptive Drugs : Combined Pill and its Mode of Action, Benefits and Adverse Effects

Diet and Care to be taken during Pregnancy

A pregnant woman (Photo credit: Wikipedia) How to take care of your Diet during your Pregnancy? During pregnancy period, a woman needs to take more ... Read More

How Does A Human Fetus Develop?